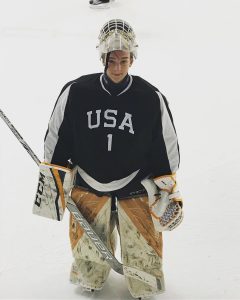 Ben Kraws has been the headliner for quite a bit of news this year, dating back to the OHL Priority Selection when he was selected in the 12th round by the Niagara Ice Dogs. Things haven’t changed much this summer.

Kraws capped off last season playing 21 games for the Buffalo Jr. Sabres 16U team, showcasing a sparkling Goals Against Average of 1.71 and a Save Percentage of .932. Even earning a call up to the big club, the Buffalo Jr Sabres, last season, Kraws did not look out of place. The young ‘tender picked up a big victory, saving 20 of 22 shots in his first taste of OJHL action.

Then in June, Kraws was one of two goalies selected to represent the USA in the 2017 Ivan Hlinka Tournament. The annual tournament was held in the Czech Republic and Slovakia from August 7-12. And while Team USA would have hoped for a stronger performance, only picking up one win in three games, Kraws, kept up his strong string of performances. The Jr. Sabres product only surrendered 4 goals in the tournament to the tune of a 1.97 GAA and a .918 SV%.

His August was filled with even more excitement though as the young goaltender also made his college commitment. On August 1, Kraws announced that he will be joining Miami University (Ohio) for the 2019/2020 season. Assuming he stays on the collegiate route, Kraws will have some playing options between now and then. Kraws can chose to say with the Jr. Sabres organization, or possibly head to the USHL with the Waterloo Black Hawks, who traded for the budding star this past July.

One more thing to check off his list before the fall season starts. Shortly after the Ivan Hlinka, Kraws was also named, as one of only four goaltenders, to the CCM/USA Hockey All American Prospects Game. The game, which is played in Buffalo, NY, features the top US talent for the upcoming NHL Entry Draft. No doubt an honor, and just another notch on Kraws belt this summer. The All-American Prospects game will take place on September 21st.

All in all, a very busy, and a very promising summer for the young standout. We would like to congratulate Ben on his accomplishments thus far and wish him the very best of luck as he continues to pursue his passion!