In our first edition of where are they now, we will be checking in on two WNY native making a name for themselves in the Ontario Hockey League. Both Stephen Dhillon (Buffalo, NY) and Tyler Johnson (Amherst, NY) are OHL veterans of the 2014 OHL Priority selection, going in the third and seventh round respectively. Both men got their first taste of the OHL in the 2014-2015 season.

Dhillon, who was drafted by the Niagara Ice Dogs would see four games action in his first year before splitting time and starting 24 games in his sophomore season, even seeing some action in the Ice Dogs playoff run that year. All in all, the young goaltender impressed with an 11-6-2-2 record to go with a sparkling 2.69 GAA and a .908 SV%. 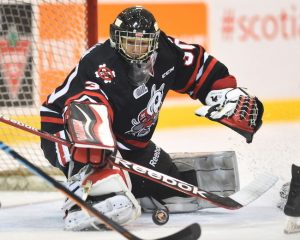 Earning the respect of his coaches, Dhillon found himself carrying the load in the 2016-2017 season. And while the stats may not show it, Dhillon kept his team afloat keeping them in games every night he was in the blue paint. And that was a lot of nights, as Dhillon finished the season playing the second most minutes among goalies in the league. But, 21 wins later, Dhillon was still able to propel the Ice Dogs into the playoffs for the second straight year. And if that wasn’t hype enough, the young tender also led the league in saves with 2114, over 400 than the next closest goalie!

Now, in his third full season, Dhillon is still racking up the W’s. Through 34 games, the young ‘tender has already matched his season total in wins and has Niagara at the top of the Central Division. Hopefully he and the rest of his team can keep it up and make a strong run in the playoffs this year! 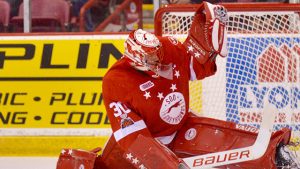 the 2015/2016 season in hopes of eventually playing for the University of Maine. Playing the Topeka Roadrunners, Johnson saw 33 games between the pipes and posted a 2.56 GAA and .906 SV% en route to finishing in the top 10 in wins with a 20-13 record.

Unfortunately, an NCAA imposed ban would keep Johnson from joining Maine and he eventually signed with the OHL’s London Knights prior to the 2016/2017 season. And he enjoyed a good run with the Knights, appearing in 26 games and picking up twelve wins.

A tough start to his second campaign with the Knight’s led to a trade to the Soo Greyhounds, a move that would suit Johnson extremely well. Since coming over, Johnson has played in 12 games, winning 9 and losing none. With a 2.51 GAA and .913 SV% Johnson will look to keep up the hot play and help keep the Greyhounds atop the West Division.

Congrats to both of these hard working young men and we wish you nothing but the best!