In our second installment of “Where are they now” we are checking in on two talented tenders who have chosen to stay stateside as they continue to forge ahead in this careers between the pipes. Williamsville native Josh Graziano and Alex Camarre of N. Tonowanda are both in their first season in the NAHL, a springboard for a whole host of NHL talent. These two are in good company, finding themselves in the same developmental league as NHL stars like Ben Bishop, Craig Anderson, Connor Hellebuyck and Ryan Miller among others. We hope that these two fine young men will find similar success on their path. 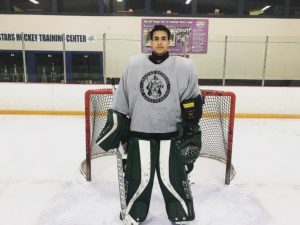 Graziano starred for Buffalo prep school Nichols finishing with the best save percentage (.913) in the CISAA for the 2015/2016 season. That year, he would wind up being selected in the 6th round of the 2016 OHL Priority Selection by the Owen Sound Attack. One year later, he would hear his name called again, this time in 2017 USHL Entry Draft by the Cedar Rapids Roughriders. Choosing to keep his collegiate options open, Graziano has joining the Coulee Region Chill of the Tier II NAHL for this year.

Graziano has seen action in fifteen games to this point in the season, picking up his first victory all the way back in November. Tough to get a rhythm going when the playing time comes with inconsistency, but the young Western New Yorker has shown what he is capable of. Really shutting down the opposition on multiple occasions, Graziano has posted an impressive .905 save percentage. With more playing time, we should only see even more of that in the future!

Camarre on the other hand got most his prior experience with the Buffalo Jr Sabres Organization. Working his way

up the ranks, Camarre spent last season with the organizations OJHL team, putting up some really strong numbers. Going 12-9 with a 2.91 GAA and .915 save percentage, he seemed poised to carry things over into this season, which he has done thus far with the NAHL’s Odessa Jackalopes.

Thus far, splitting time between the pipes, Camarre has not disappointed. His thirteen wins to this point in the year actually have him two ahead of his counterpart on the Jacks’ and the stats he’s been putting up will surely push him further. As it stands, Camarre is 9th in the league with a 2.22 GAA and just off the tops in save percentage. On the back of a strong season, including three shutouts, Camarre is currently fourth in the NAHL with a .930 save percentage.

As both of these young men continue to find there grove, we know the sky is the limit! And we wish them both the best of the luck!