Every March, USA Hockey selects a group of players to take part in their NTDP Evaluation Camp. The purpose of this camp is to select the players for the upcoming USA National Team Development Program U-17 roster. A JSG student, and Rochester’s own, Grant Riley, will be one of those players making his case in […]

In our second installment of “Where are they now” we are checking in on two talented tenders who have chosen to stay stateside as they continue to forge ahead in this careers between the pipes. Williamsville native Josh Graziano and Alex Camarre of N. Tonowanda are both in their first season in the NAHL, a […]

In our first edition of where are they now, we will be checking in on two WNY native making a name for themselves in the Ontario Hockey League. Both Stephen Dhillon (Buffalo, NY) and Tyler Johnson (Amherst, NY) are OHL veterans of the 2014 OHL Priority selection, going in the third and seventh round respectively. […]

Yesterday, Williamsville Native and former JSG student got the call from USA Hockey that he would be one of the 25 men representing his country at this year’s Winter Olympics in South Korea. “It was definitely a nice moment, to say the least … You dream of playing in the Olympics” Leggio was quoted saying […]

Ben Kraws has been the headliner for quite a bit of news this year, dating back to the OHL Priority Selection when he was selected in the 12th round by the Niagara Ice Dogs. Things haven’t changed much this summer. Kraws capped off last season playing 21 games for the Buffalo Jr. Sabres 16U team, showcasing […]

An honor to be one of the coaches at the 10th Annual Warren Strelow Goaltending Camp, it was also a treat to see some familiar faces. Representing Western New York and the JSG family is Goaltenders Stephen Dhillon, Tyler Johnson and Ben Kraws. A big congrats goes out to these three for earned the opportunity […]

Its not many times when your team outscores opponents 10-5 and you still find yourself on the outside looking in. Sometimes it’s just not in the cards, but not always for a lack of skill and effort. Especially when it comes to the two young men who manned the blue paint for the Buffalo Jr Sabres […]

The names between the pipes for the 13th Annual Scotty Bowman Showcase with have a distinctly strong JSG vibe to them this year. Set for March 22nd, the tournament features high school Juniors, Seniors, Prep and Junior players from the Buffalo and Rochester areas. Let’s look who made it! Grand Island Junior Jason Lupp will go for […]

That’s quite an understatement given Buffalo NY native, Stephen Dhillon’s most recent performance. Helping to keep his Niagara Ice Dogs in the thick of a playoff hunt, he came up big the other night with a huge, 54 save performance in a crucial 3-2 victory over the Hamilton Bulldogs. Earning himself first star honors in […]

Longtime JSG student and Williamsville native Steve Racine is in his first season as a pro hockey player after a four year career at the University of Michigan. And after amassing a 50-22-7 record during his outstanding stint with the Wolverines, Racine has now added another one in the win column. Playing for the Florida […]

This past Tuesday, Janosz Goaltending Student Lindsay Browning played in her first boys varsity game for the Penfield Patriots. And while Greece may have opened the scoring, holding a 3-1 lead deep into the third period, this story would not end there. The Patriots would even things up forcing OT where they would ultimately come […]

We were up in St. Catharines last night to see WNY native and JSG gradute Stephen Dhillon and the Niagara Ice Dogs take on the Sudbury Wolves.   The first period didn’t provide much action down at Dhillon’s end, only facing five shots in the first twenty while his teammates pumped seventeen on net down at […]

Sunday night’s Ottawa Senators/Edmonton Oilers game proved to be an emotional one.   Last week, Senators Goalie Craig Anderson announced he would be taking personal leave. Just a day later, his backup, Andrew Hammond suffered an injury though, leaving the Senators without an experienced tender between the pipes.   It was then the reason […]

Amherst Native, Tyler Johnson, has signed with the OHL Powerhouse London Knights for this coming season. Johnson, who was originally drafted by the Plymouth Whalers in the 7th Round of the 2014 OHL Priority Selection was also a selection of the Muskegon  Lumberjacks in the 2016 USHL Entry Draft. Johnson, however, spent last season starring […]

Congrats to Buffalo Bisons’ Goaltender, Lindsay Browning, on here recent college commitment. The Western New York Native will be staying in state, but heading east to Ithaca to join The Cornell Big Red Hockey Program.   This announcement comes on the heels of Browning being named to the prestigious 18U Select Development Camp that wrapped up at […]

After making some big save for the Maize and Blue this past season, Steve Racine has stepped in and continued to make some big saves. But this time, for his hometown team, the Buffalo Sabres. After Linus Ullmark went down with and illness, the Williamsville native joined the Sabres Development camp to round out the goaltenders. […]

Congratulations goes out to Lindsay Browning! The Buffalo Bisons goaltender will be headed to Biddeford, Maine at the end of June. She will be heading North after being selected to participate in the 18U Select Development Camp. This camp will feature the top 66 18U female players being scouting by USA hockey, among them are […]

College Bound!   Congratulations go out to Andrew Lee on his recent commitment to play for Nazareth College.   The East Amherst native has spent his last two years in the OJHL with the Burlington Cougars. THis past season though, Lee really excelled, making 37 starts to the tune of a 22-14 record. He also […]

What an Honor!   Congratulations to Steve Racine on his selection as the Bob Ufer Michigan Senior Athlete of the Year. The Williamsville native has compiled an impressive 50-22 record during his tenure between the pipes. Twenty of which came during his senior campaign! That benchmark was good enough to put him in a tie […]

Congratulations to Williamsville Native David Leggio!   Uncertain where his pro hockey career would take him next, Leggio found a home with Red Bull Munich in the German DEL. The Clarkson graduate completed a strong regular season and followed it up with an even stronger playoff performance for the Red Bull. Playing in all 13 […]

With tryouts just around the corner this article will focus on some reminders to help have a successful tryout. Tryouts can be very stressful for any goaltender. It’s important to harness that stress into positive energy. Here are some tips on how to show your strengths and stand out in a tryout situation. 1.) Make […]

Coaches at every level wish their goaltenders controlled rebounds better. Rebound control can be improved by every goalie at every level from youth through pro. Goalies know that they need to control rebounds; but they often don’t know “how”. This article will focus on the overall approach to the shot and post save response in […]

Last article focused on the necessary footwork in order to be squared and set for the shot while maintaining appropriate depth. Before we cover the technical aspect of how to actually make the save we must determine the situation. The butterfly and its variations are the cornerstone of the goalies save skill set, more specifically […]

Goaltending has and will continue to change and evolve on an almost daily basis. Goalies and coaches are constantly coming up with new and better techniques to stop the puck more efficiently. Goalies of different sizes and strengths may play the same situation differently, resulting in a variety of goaltending “styles”. With that being said […]

For years everyone has heard that goalies need to be good skaters, perhaps the best on the team. This is still true, but too often overlooked. Goalie specific crease movements should be quick and efficient. Unfortunately, many young goalies that haven’t been trained properly are sometimes the worst skaters on the team. Being a poor […] 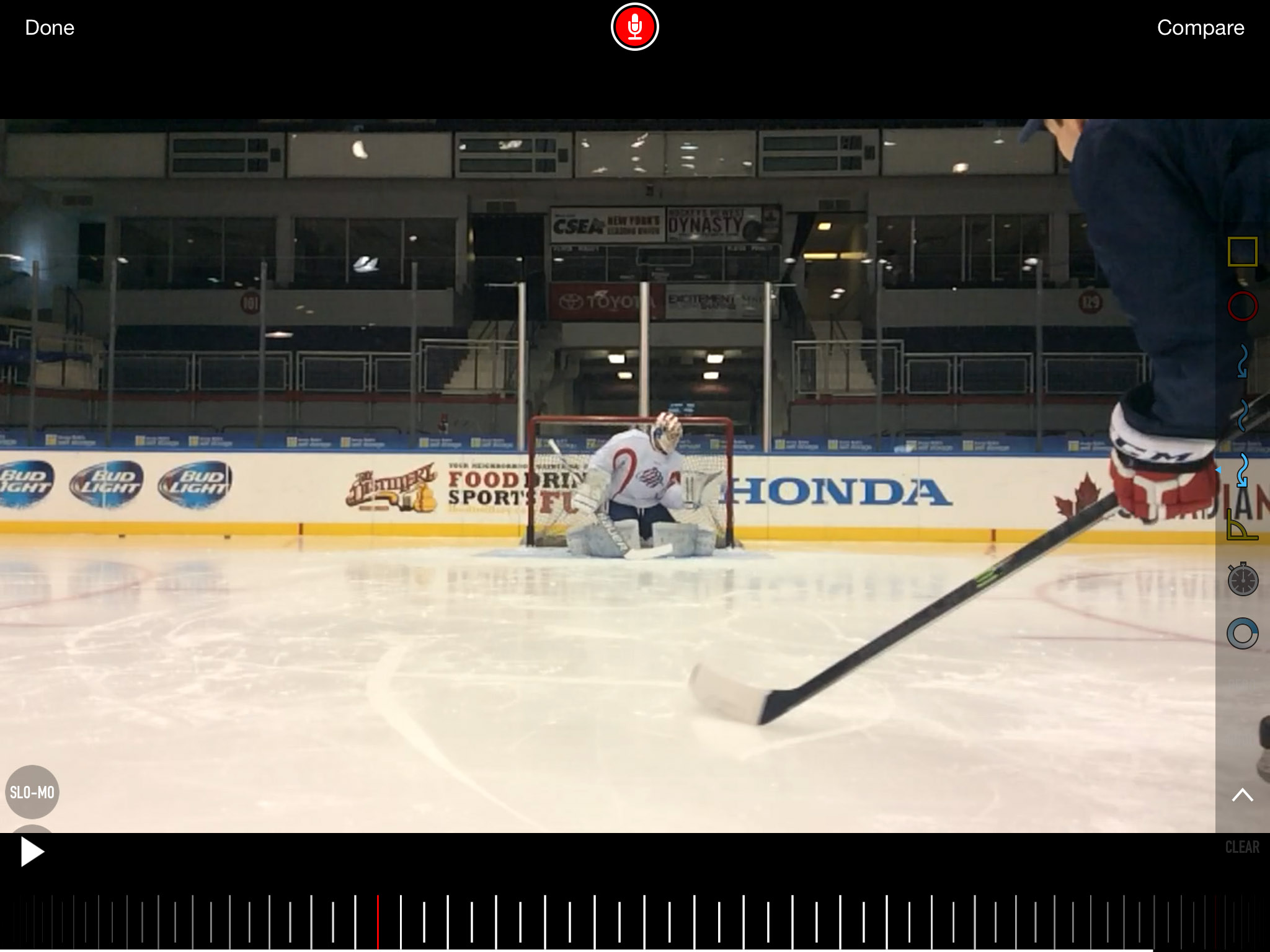 In previous articles we discussed the necessary footwork, basic positioning, and save techniques required to give the goaltender the best possible chance to make the save.

Handling the puck is an important but often overlooked skill for goaltenders in today’s game.  This is an area of weakness for the majority of youth level goaltenders.   They either leave too many rims or turn the puck over too much.   In many cases coaches get frustrated with the turnovers so they discourage the goalie […]

There have been recent advances in save techniques goalies use on plays around the net.  I consider net plays as any shot or risk of a shot from the bottom of the circles to behind the net.  See diagram below.  The new save technique is called a “Post Lean” or “Reverse VH”. When used properly […]